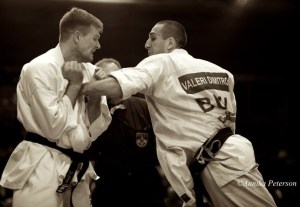 For many stand-up combat sports, the ability to move forward against the resistance of an opponent may is critical in the success of scoring a decision win, or optimising position for a knockout blow. Some fighting styles, Kyokushin Karate for an example, are scored heavily on the ability to move forward (or inversely not move back), and demonstrate aggression and control of a bout.

The ability to sustain this forward pressure is a multifactorial skill, and relies on your relative anthropometrics in comparison to your opponent’s (obviously not a modifiable factor), skill and technique, as well as psychological factors such as natural aggression and confidence.

We can also supplement these factors in the weight room with some specific resistance training exercises to enhance forward pressure.

Many of our horizontal pushing exercises (bench press, push up, etc.) are performed such that the force is being directed vertically (up and down), and whilst push ups do challenge the strength and control of the abdominals, we can effectively utilise horizontal pressing movements in standing to add greater transfer to fighting.

The standing cable press may be performed in parallel stance (feet side-by-side) or in split stance, the later having the advantage of being able to handle greater load, and more closely simulating a fighting stance.

Whilst this exercise may be performed in standing, in order to make it a more effective strength training movement for the upper body, it is often training in half kneeling or tall kneeling (all positions are demonstrated in the clip below). Perform a pressing action in this position (although not with the feet in contact with the floor), loads the abdominals similar to the way they are used when moving forward against an opponent. The focus in this exercise should be on avoiding arching through the lower back as you press up.

Not all athletes will have access to a sled, but those who do should use it to their advantage. The basic sled push trains the ability of the legs and hips to produce force horizontally (pushing backwards, as opposed to a squat, where the force is produced predominantly in a vertical direction), the same direction required to resist forward pressure from a strong opponent. Whilst sled pushes may be performed with lighter loads to train speed, or as a conditioning drill, for the purpose of pressure training they should be loaded up as heavily as possible, so that the movement forwards is relatively slow.

The sled may also be used as resistance while performing shadow work, with the emphasis on moving forwards. If one does not have access to a sled, a thick resistance band may be used to elicit a similar training effect.

Finally, a number of different exercises (the dumbbell overhead press is used in this example) often used in our strength training programmes may be performed with a resistance band around the waist/hips, making the athlete have to work to maintain a stable position.

The other thing you’ll note in this clip is that I am using a 120 beat per minute music track to guide my tempo for the exercise (3-0-1-0) to ensure I am getting sufficient time under tension.

A full exercise library, with links to over 450 youtube instructional videos, is featured in the science of striking, available in both hard-copy and kindle formats (https://www.amazon.com/Science-Striking-Comprehensive-Physical-Preparation/dp/1729586821/ref=sr_1_2?ie=UTF8&qid=1543575646&sr=8-2&keywords=The+Science+of+Striking+Sam+Gilbert)