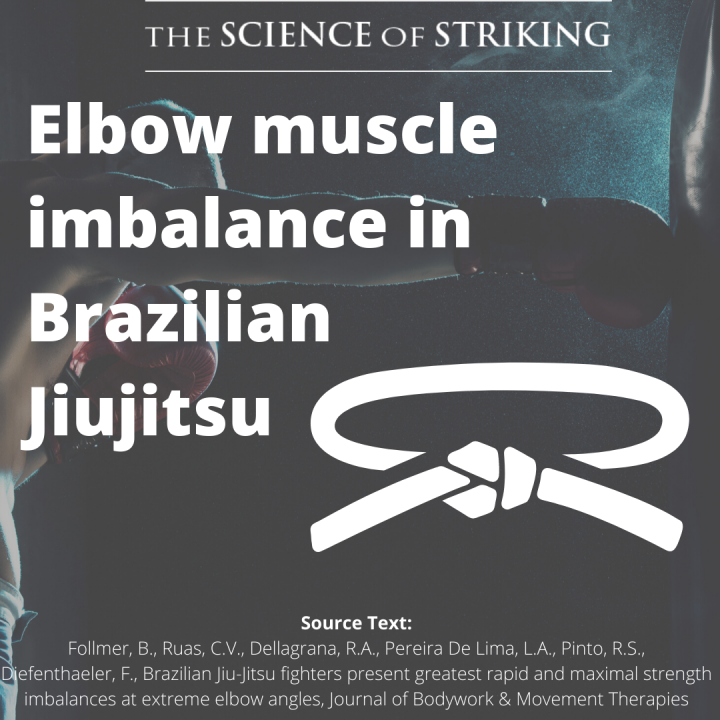 The sport of Brazilian Jiu Jitsu (BJJ) requires both fast, explosive actions, as well as maximal force contractions, often at ends of ranges. An imbalance between elbow flexor and extensor strength may predispose the athlete injury in this area, due to reduced joint stability.

In this study, 23 male BJJ athletes first underwent strength testing of the elbow muscles in an isokinetic dynamometer. They performed 5 second maximal force isometric contractions into elbow flexion and elbow extension at 45, 60, 75, 90, 105 and 120 degrees. They then performed isokinetic strength testing on the same device through 30-130 degrees, at a speed of at 1.04 rad·s-1. Rapid and maximal angle-specific torque ratios were then calculated by dividing the flexion scores by the extension scores (F/E).

Both the rapid and maximal F/E ratios were shown to be greater in mid-ranges, suggesting that strength imbalances exist at the beginning and end points of the range of motion, with the lowest ratio values occurring at 45 and 120 degrees. These findings were similar between more experienced and less experienced practitioners.

These findings may be of use in designing strength and conditioning programs for this population.