In the previous post we discussed tools that can be used to directly assess striking power.

Most of us will not have access to these tools, and even when we do, we should always combine these direct assessments with traditional physiological power assessments in order to work out how the athlete is producing the power. This post will provide some examples of commonly used power assessments.

The vertical jump is the most commonly used assessment of lower body power output, and may be measured by several different means. In a laboratory setting, force plates etc. are often used to accurately measure not only jump height, but also the individual force profile of the athlete (in which portions of the movement they produce the most force and the speed at which they do this)1. Other more advanced tools such as switch mats may be used to measure the contact time with the floor, as a muscle of an athlete’s plyometric ability during exercises such as depth jumps.

While these methods of measurement are usually out of reach of most consumers, there are some more affordable options that can accurately measure jump height. Jump mats, such as the chronojump mat featured in the clip below, are easy to use and provide real-time feedback regarding an athlete’s jump height.

The vertec is a popular device where the athlete jumps up to touch a stack of markers, indicating the height of maximal reach. 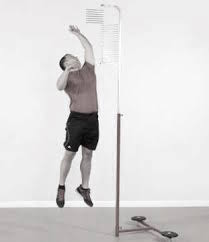 As discussed in the previous post, power assessments such as the vertical jump may be used to compare power output to other athletes, or track performance. We can also use two different measures of the vertical jump to provide data regarding an athlete’s power profile. The first of these jumps is the countermovement jump, where the athlete dips down and explodes straight back up. The second is the squat jump, where the athlete squats down and pauses at the bottom for 3-4 seconds, thus taking out the eccentric component of the movement. We can take the difference between these two jumps to calculate what we refer to as the eccentric utilisation ratio (EUR).

For example, if an athlete has a countermovement jump of 44cm and a squat jump of 40cm, their eccentric utilisation ratio would be 44/40 = 1.10. A normal range for this test for most athletes is 1.05-1.202. If your score is closer to 1, this means that the two scores are similar and you lack the ability to produce force quickly. In this case the training focus should be on faster power training with lighter loads. If your score is over 1.20 then your higher load force may be lacking, and heavy strength training, or power training with heavier loads (heavy Olympic lifts etc.) may need to be prioritised.

Many of our power assessments (such as the vertical jump) tend to prioritise vertical power (jumping upwards), and we often tend to ignore horizontal power development, both in our testing and in our training. If you look at the biomechanics of a punch (read the post on this here if you haven’t already:http://www.thescienceofstriking.com/training/the-biomechanics-of-a-knockout-punch/), you’ll see that a great deal of the force production in the rear leg during a punch is directed horizontally. As such, it is important that we train both strength (using exercises such as hip thrusts, and sled pushes) and power (broad jumps and kettlebell movements), as well as assess power output in this direction.

A simple way to assess horizontal power is the standing broad jump. Starting with the toes on a pre-determined line, dip down into a partial squat and attempt to jump forwards as far as possible. From here simply mark the landing point. The test may be performed as a single jump effort, or as repeated test (e.g. marking the distance for 3 consecutive jumps) which provides more of a measure of an athlete’s ability to transfer force from an eccentric to a concentric contraction.

The jump distance should be calibrated against the athlete’s height, and most athletes should be able to jump the distance of their height, with an aim to get this over 130% (i.e. for a 180cm tall athlete, a goal would be to jump forwards 234cm).

Both the horizontal and vertical jumps should be standardised by having the athlete perform the movement starting with the hands on the hips, which takes the arm swing out of the equation, as this method of jumping tends to favour athletes with a history of jump sport experience3

In the next post we will discuss upper body power tests.

A detailed discussion of power assessments is featured in the science of striking, available in both hard-copy and kindle formats (https://www.amazon.com/Science-Striking-Comprehensive-Physical-Preparation/dp/1729586821/ref=sr_1_2?ie=UTF8&qid=1543575646&sr=8-2&keywords=The+Science+of+Striking+Sam+Gilbert)