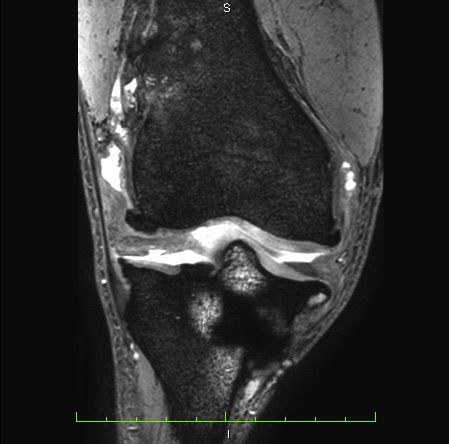 So those of you who know me well know that issues with my right knee have plagued me ever since my first ACL rupture in 2002. After a re-rupture and subsequent revision reconstruction 18 months later, I carried on competing at the highest level, constantly pushing the knee to its limits of function. Although the ACL graft has always remained intact, I started having some joint issues towards the end of my competitive career, and in 2009 opted for an arthroscope and microfracture to stimulate some joint surface regeneration, which saw me through the the last two years until my retirement at the 2011 world tournament. At the time of the operation my surgeon Julian Feller commented that I had a “pretty crapy knee” (the psychosocial implications of which could be discussed at length!!)

After finishing life as a competitive athlete, I’ve continued to be active, sparring 1-2x/week, teaching children’s karate classes, and performing various forms of weight training. For the most part my knee has been manageable. It’s never perfect, but I’ve had a fairly good understanding of what the joint can tolerate and have been able to manage training loads according. There have been some episodes of acute joint flare ups, but these have generally settled in due course.

At the end of March, following an ordinary sparring session, I was walking up the stairs of Club 360 and on the last step experienced a series of large cracks, followed by gross swelling and difficulty weight bearing. This acute exacerbation was unlike anything I’d experienced before and was far more painful and debilitating then either of the ACL ruptures. After 10 days of relative rest with minimal improvement, I decided to proceed with some imaging of the knee. Now in my own clinical practice I am being more and more conservative with the use of imaging in my patients, as many of the things we see on scans are largely irrelevant, and the pathologising of imaging findings can often be harmful in increasing vigilance and catastrophising, leading to poorer outcomes1,2. However, while the pain wasn’t of major concern, something in the knee just felt very “wrong”. Knowing the state that my knee was in 10 years earlier, I knew the pictures weren’t going to be pretty. However, when I opened up the scans even I was shocked at the state of the knee. My physio and other medical colleagues reading this will be able to empathise that the degeneration revealed in these images is particularly advanced for a 37-year-old!!! 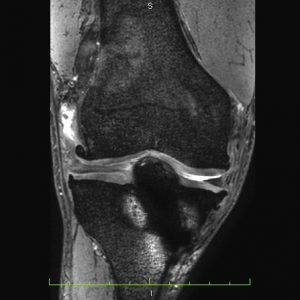 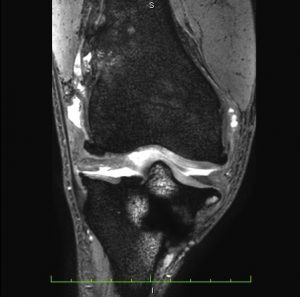 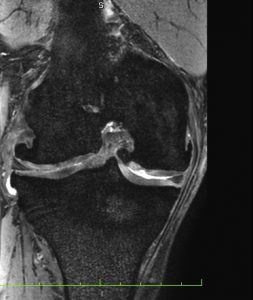 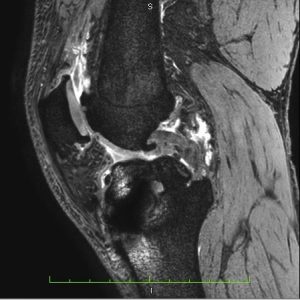 I now had to consider my options for management. Again, within my own clinical practice I am always in favour of guiding a patient towards conservative management where possible. However, I couldn’t help but feel that the sensation of “wrongness” in the joint was attributed to structural changes caused at the time of injury. I contacted Professor Feller (who performed all 3 of my previous surgeries) and booked his first available surgery slot. This did, however, involve a 3-month wait. I felt more comfortable doing this rather than looking at  local options.

So with surgery in the books for 3 months time, I needed to regain at least some level of normal function. Knowing that I had a spot on the operating table to at least have some of the issues addressed gave me a certain degree of peace of mind, which allowed me to start loading the joint without as much apprehension. Once walking was pain-free, I started increasing the load in the form of basic resistance exercises, initially starting with 2 legged bodyweight squats, and gradually progressing the load tolerance of the joint over time. Strength training sessions were structured so that I would maintain strength on the non-affected side (in the clip below using modified pistol squats – on a box to reduce load on the moving limb), while performing a lower-intensity variation of a similar movement pattern on the affected side (in the clip below using a barbell back-loaded split squat).

Heavy strength work on the non-affected side was maintained and even improved on with the use of heavy unilateral work. The other goal of this was to help preserve strength levels on the affected side via the cross-education effect. This is a phenomenon whereby training one side of the body helps maintain strength on the opposite side, and this has even been shown to occur when a limb is immobilised for a certain period of time3,4,5. In the process I also hit a single leg deadlift PR of 110kg for 3 reps.

Part of the training also involved performing some specific hypertrophy work for my quadriceps bulk, which had quickly atrophied. I utilised blood flow restriction with isolated leg extensions, slow tempo (hence the metronome) and high volume, to achieve a positive training stimulus without excessive joint loading6.

I gradually started incorporating more skills work, initially focusing on boxing, returning to boxing sparring at 5 weeks, adding in left leg kicks at 8 weeks, and began gently kicking with the right leg at 10 weeks. Throughout this what was to be prehabilitation phase I gradually started to feel confident in the knee, and by mid-May was starting to feel somewhat normal again. I decided to hold off on booking flights to Melbourne and see how hard I could push the knee, as I could see a prolonged conservative management may be realistic. Pertinent to the management plan was the fact that I am aiming to grade for my Shinkyokushin 4th dan at the international seminar in November this year. Undergoing surgery in July would potentially make for a tighter timeline, whereas being able to manage the condition conservatively would give me more time to prepare.

I started kicking the bag again with the affected leg, using the UFC force tracker to monitor the number of repetitions and intensity of the kicks, so that I could grade the progression of kicking load on the leg.

Strength training started to involve some higher velocity work in the form of hip dominant movements such as the kettlebell swing. Here is an example of 2 different variations; a heavier swing with 48kg, and a swing involving a “pulse” at the top of the movement.

I maintained explosive power on the affected side with exercises such as box jumps, while starting to expose the right leg to some gentle knee-dominant explosive work with light 2-legged box jumps, and at the same time training landing ability and balance with some single leg depth lands onto an airex pad.

Sparring volume and intensity has increased. Below is a snippet of the last of 7×3-minute rounds of mixed-rule sparring with J-Network Light Heavyweight Muay Thai champion Brian “Blood Bath” McGrath. I am still lacking a some confidence with the right leg but feel that I am moving well, and following the last few sparring sessions have had no increase in symptoms.

So this week marked 3 weeks out from my scheduled surgery date. At present I am able to load the right leg with a significant amount of weight and am able to spar and kick the heavy bag (albeit without full power), all without significant increase in symptoms the following day. Furthermore, I have no major issues with activities of daily living and am thankfully able to ascend and descend the 2 flights of stairs of our new house. At this stage I am confident of progressing my loading and as such on Thursday of this week contacted Professor Feller to postpone the surgery indefinitely.

I have no doubt that I will require surgical intervention at some stage and likely a very early total joint replacement, however at this stage I am very happy with what I have been able to achieve with targeted conservative management and detailed load progression. The knee will never be perfect and even if I opted for surgery the knee would likely have never been the same as before. It will still ache sometimes if I push it too much and I fully expect to have the odd twinge of joint pain. But I do believe that this has highlighted even to me, a clinician who strong believes in the lack of correlation between symptoms and imaging findings etc., that structure often does not equal function, and we should always consider all elements to an injury. This reinforces my reserve to explore all conservative options with appropriate patients, even in the presence of significant structural change. The whole process has been somewhat of a psychological roller-coaster, especially in terms of indecision associated with whether or not to proceed with the surgery, and it has been interesting to identify significant changes in symptoms based on my attitude towards the knee and my confidence with it. I also can’t rule out the influence of the positive mood state associated with the cats being on top of the ladder throughout the entire process (celebrated by by cats jersey worn for all strength training sessions).

The next 5 months will be about continuing to monitor and adjust loading of the knee and hopefully continue to progress my function to the point where I am able to successfully attempt my grading at the end of the year.

If you are interested in reading further into common sports injuries, load management and modifying training programmes around pain and injury, The Science of Striking is an excellent resource for health and fitness professionals, athletes, and fitness enthusiasts of all levels, particularly those participating in combat sports. Available in paperback and kindle formats.