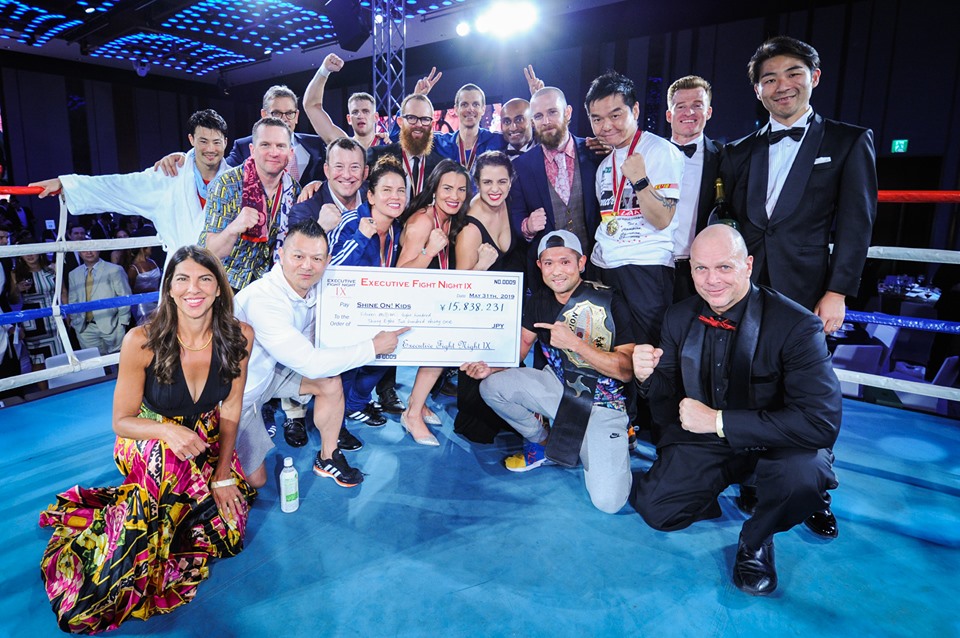 The 9th Tokyo Executive Fight Night (EFN)  was held on May 31st at the Roppongi Grand Hyatt ballroom and was a massive success, raising 21 million for the Shine on Kids charity supporting kids with cancer. All the participants acquitted themselves well and showed the fruits of their labour.

At the start of the EFN training camp we detailed a battery of physical assessments that we performed to identify some basic athletic traits amongst the competitors, and to see if these were predictive of success in the event. For a recap, read the previous blog post here:

The results of the testing were compared with the results of each individual bout (see below – the winner of each and the competitor who performed best in each individual characteristic are highlighted in bold). In some instances unfortunately we weren’t able to collect the data for a test for a particular athlete, and in other instances a particular physical characteristic was similar for both athletes.

Unfortunately, overall none of the physical characteristics were predictive of victory. Out of the 9 matches on the night, having a greater reach was associated with victory in 3, lower limb explosiveness in 3, eccentric utilisation ratio in 4, grip strength in 4, upper limb power in 4, and stamina in 4. Without a full statistical analysis there didn’t appear to be any trends in terms of combinations of different characteristics being predictive of victory either.

Obviously this is an amateur event with a wide range of experience levels, and while the participants are as evenly matched as possible, there is often a large discrepancy in both initial ability and change in ability throughout the training camp, and it is highly likely that boxing skill trumped athleticism in many of the bouts. It is also difficult to predict how individuals will respond to such an occasion, and the pressure of making their debut on such a big stage. This will also have likely influenced their results.

So whilst within this limited sample size we didn’t come out with any correlative data we will tighten up and re-run the testing process next year and run the results again.

Congratulations again to all the fighters as well as Ginja Ninjas and Shine on Kids for putting on another magnificent event.

A full framework of physiological testing is featured in the science of striking, available in both hard-copy and kindle formats (https://www.amazon.com/Science-Striking-Comprehensive-Physical-Preparation/dp/1729586821/ref=sr_1_2?ie=UTF8&qid=1543575646&sr=8-2&keywords=The+Science+of+Striking+Sam+Gilbert)