Low back pain (LBP) is the most common orthopedic complaint in general practice and is also extremely common in sporting populations, including combat sports athletes. There are countless methods of treating LBP described in the research, clinical practice environments, and lay media.

We approach the treatment of LBP, as with any musculoskeletal issue, with an analysis of relevant load. Load is essentially any type of stress that is applied to the system (i.e. the human being who is affected by their condition) that has the potential to influence pain. You can see from the first figure the different types of load that may be involved. The art of successful back pain management revolves around understanding these types of loads and how the fighter is influenced by each, and then reverse-engineering the injury process to address these relevant factors. 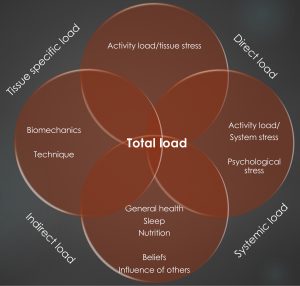 The other thing that is important to understand is that each of these loads is also under the influence of time. A certain amount of load may be safely tolerated under a certain time frame, but injurious if that time is lessened. A takedown attempt with a certain amount of force applied over 400ms might be tolerated by an athlete but the same technique applied over 200ms might cause the excessive stress to the back and lead to injury. Likewise, a certain training load spread over 8 weeks might not be tolerated over 6. 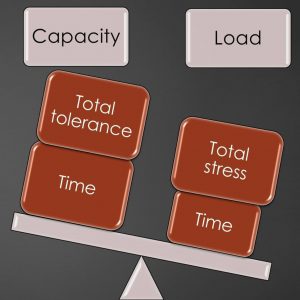 This is why it is so important to perform a thorough subjective assessment. The first goal of the subjective is to rule out any red flags, which include serious musculoskeletal pathology that may influence management (e.g fractures, serious neurological dysfunction) and non-musculoskeletal pathology (i.e. tumours). Following this, we use our questioning to learn where the fighter has potentially become overloaded. Understanding this will help guide both the initial injury management, and also the long-term rehabilitation. We then look to gain a deeper understanding of these factors through physical assessment.

In the next series of posts, we will investigate the different categories of load.