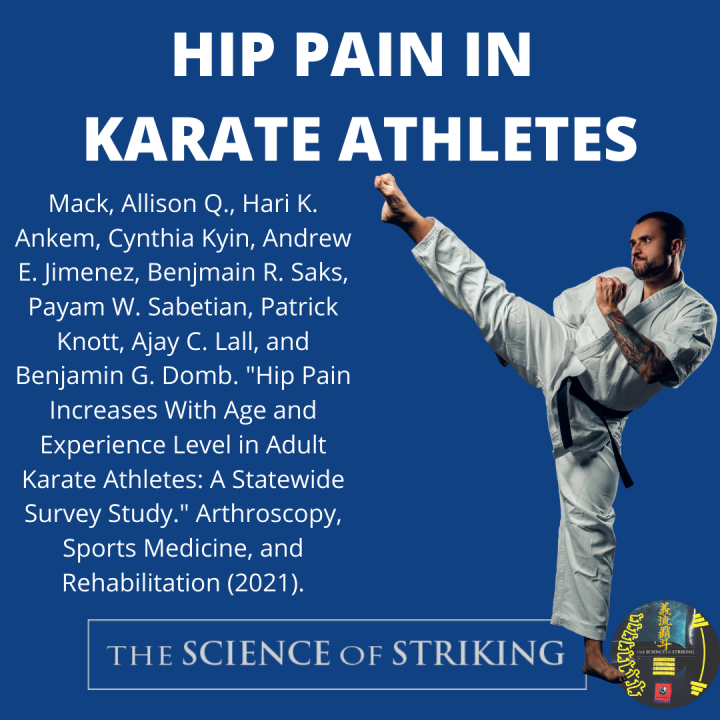 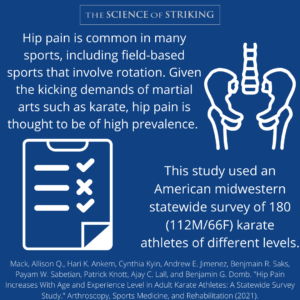 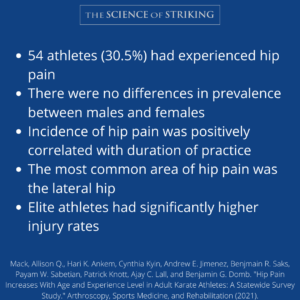 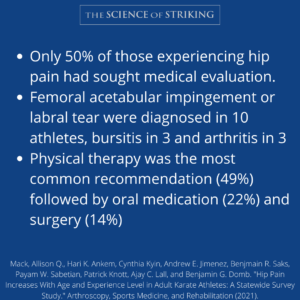 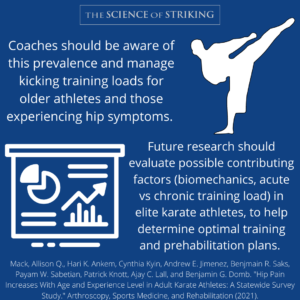 Hip pain is common in many sports, including field-based sports that involve rotation. Given the kicking demands of martial arts such as karate, hip pain is thought to be of high prevalence.
This study used an American midwestern statewide survey of 180 (112M/66F) karate athletes of different levels.
54 athletes (30.5%) had experienced hip pain
There were no differences in prevalence between males and females
Incidence of hip pain was positively correlated with duration of practice
The most common area of hip pain was the lateral hip
Elite (defined as being a member of the national team) athletes had significantly higher injury rates
Only 50% of those experiencing hip pain had sought medical evaluation.
Femoral acetabular impingement or labral tear were diagnosed in 10 athletes, bursitis in 3 and arthritis in 3
Physical therapy was the most common recommendation (49%) followed by oral medication (22%) and surgery (14%)
This study indicated lower rates of hip injury in comparison to Hapkido, Taekwondo and Capoeira, which is hypothesised to be due to the lower volume of kicking.
Obvious limitations of the study include recall and selection bias. The survey methodology allowed for inconsistencies in the diagnostic process, and given the wide range of athlete age and level, the sample sizes for individual populations within the broad spectrum of karate athletes possibly left the study underpowered. It would have also been useful to include questioning regarding the impact of hip injury on practice and competition performance.
The findings of increasing hip pain prevalence with age and duration of practice makes sense in terms of longer duration of chronic hip loads with activity. Coaches should be aware of this prevalence and manage kicking training loads for older athletes and those experiencing hip symptoms.
Future research should evaluate possible contributing factors (biomechanics, acute vs chronic training load) in elite karate athletes, to help determine optimal training and prehabilitation plans.
#karate #taekwondo #kicking #combatsports #hippain