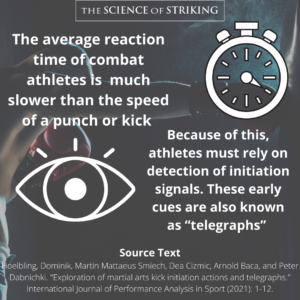 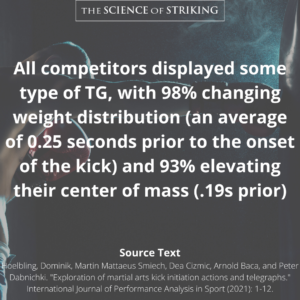 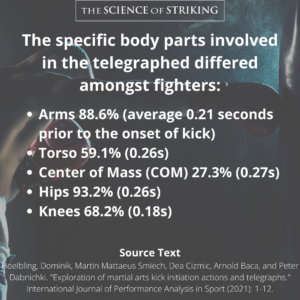 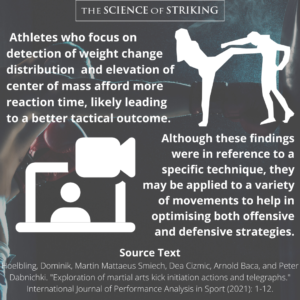 The average reaction time of combat athletes is >500ms, which is much slower than the speed of a punch (200s) or kick (260s). Because of this, athletes must rely on detection of initiation signals in order to defend or counter attack. These early cues are also known as “telegraphs” (TGs). It is also known that more experienced athletes focus on more proximal body segments of their opponents.

As a result of this, athletes need to decrease the extent to which they perform these TGs, whilst maintaining biomechanical efficacy and effectiveness of their technique. The aim of this study was to identify these TGs, specific to the lead leg double kick.

Technique analysis was performed on 44 international-level combat sports (not specified but likely TKD) athletes using 39 markers and 8 infrared cameras. Phases were described as:

All competitors displayed some type of TG, with 98% changing weight distribution (an average of 0.25 seconds prior to the onset of the kick) and 93% elevating their center of mass (.19s) .

According to these findings, athletes who focus on detection of weight change distribution (WRT) and elevation of center of mass (CET) afford more reaction time, likely leading to a better tactical outcome. Of these, as WRT occurs earlier, it may be a superior focal point, but possibly more difficult to recognise for less experienced athletes. The 9% (3) athletes who did not perform a hip joint TG were all among the top 10 most successful athletes.

Although these findings were in reference to a specific technique, they may be applied to a variety of movements to help in optimising both offensive and defensive strategies.