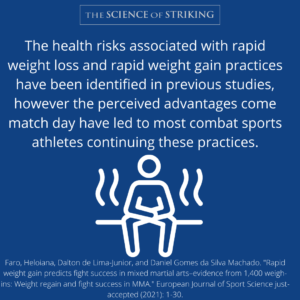 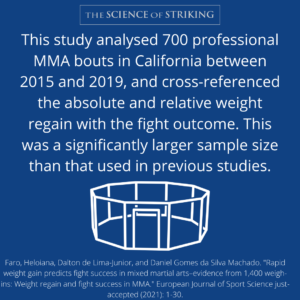 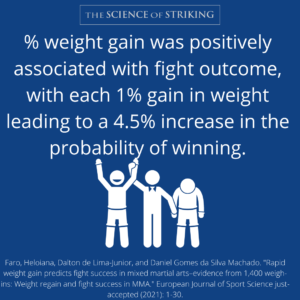 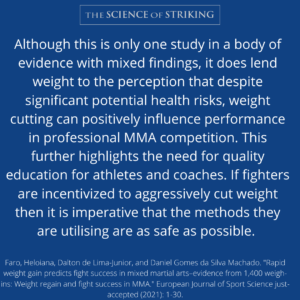 Weight cutting, and the associated risks and advantages/disadvantages is a topic of great focus in the combat sports world. Most combat sports athletes will engage in rapid weight loss (RWL) prior to weigh-in, followed by rapid weight gain (RWG) leading up to the scheduled bout.

The health risks associated with these practices have been identified in previous studies, however the perceived advantages come match day have led to most athletes continuing RWL/RWG practices.

This study analysed 700 professional MMA bouts in California between 2015 and 2019, and cross-referenced the absolute and relative weight regain with the fight outcome. This was a significantly larger sample size than that used in previous studies.

% weight gain was positively associated with fight outcome, with each 1% gain in weight leading to a 4.5% increase in the probability of winning.

Although this is only one study in a body of evidence with mixed findings, it does lend weight to the perception that despite significant potential health risks, weight cutting can positively influence performance in professional MMA competition. This further highlights the need for quality education for athletes and coaches. If fighters are incentivized to aggressively cut weight then it is imperative that the methods they are utilising are as safe as possible.