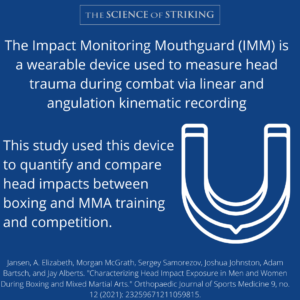 The Impact Monitoring Mouthguard (IMM) is a wearable device used to measure head trauma during combat via linear and angulation kinematic recording via 4 accelerometers, each transmitting 3 channels of data. This study used the above-mentioned device to quantify and compare head impacts between boxing and MMA training and competition.

The average number of impacts per session was similar between the two sports. Peak linear (forwards and backwards) acceleration (PLA) was non-significantly higher in boxing, whereas peak angular acceleration (PAA) was significantly higher in MMA. This matched the distribution of impact location, which in boxing were more in the front zone, while in MMA impacts were more evenly spread. As expected, competition data revealed a lower number of impacts but greater PLA and PAA than sparring. This is relevant, as angular impacts are thought to be more deleterious to long-term brain health.

These findings may reflect the differences in technique, including punching technique, between the two sports. More specifically, this may relate to the fact that as MMA athletes have to master a greater number of skills, their boxing skill is likely to be lower than boxers of a similar level, leading to less accuracy and/or control with their punches.

This study was not performed in professional athletes, and as such should be repeated in higher levels of combat sports athletes, it does provide useful information that can be used to inform training practices.

Furthermore, once this technology becomes more mainstream, it may help coaches quantify athlete head trauma as part of a preventative approach for long-term brain injury.