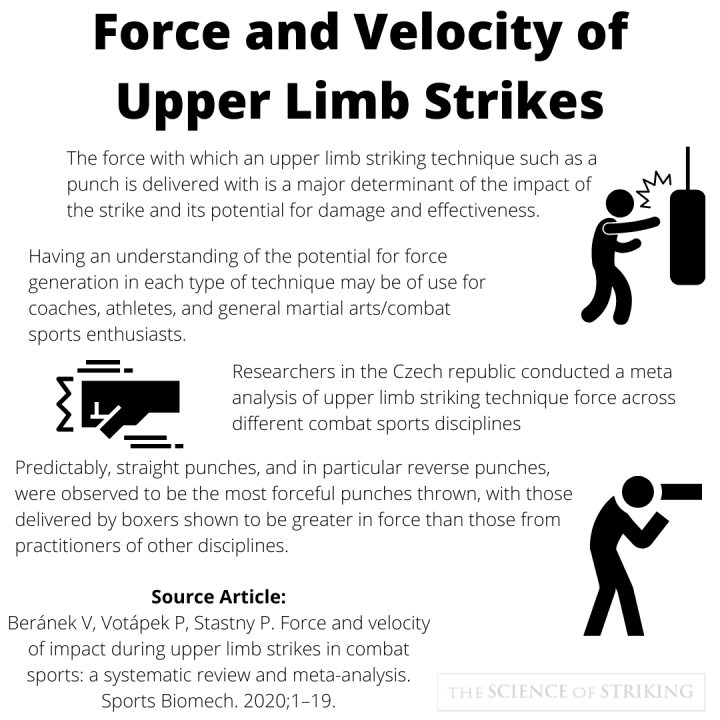 The force with which an upper limb striking technique such as a punch is delivered with is a major determinant of the impact of the strike and its potential for damage and effectiveness. Previous research has shown greater levels of mean and maximum punching force in winning vs. losing boxing contestants.

A great variety of different upper limb striking techniques exist across a range of different combat disciplines. The use of different strikes within a sporting environment may be governed by the rules and tactical requirements of the individual sport, aside from sports such as MMA, where most striking techniques are allowed. In a self-defence scenario, there is obviously no restriction on the type of technique used, and, as such, having an understanding of the potential for force generation in each type of technique may be of use for coaches, athletes, and general martial arts/combat sports enthusiasts.

The quantitative analysis examined techniques from different fighting disciplines, and techniques using the metacarpophalangeal joints (the knuckles) and the palm.

Predictably, straight punches, and in particular reverse punches, were observed to be the most forceful punches thrown, with those delivered by boxers shown to be greater in force than those from practitioners of other disciplines.

The rear-hand straight punch in boxing was reported to be on average 1,659N, with the highest recorded value being 3,420N. The average velocity of all strikes was 8.8 m/s.

Whilst the meta analysis was useful in confirming the researcher’s hypothesis and a common assumption that the reverse punch is the most powerful upper limb striking technique, the fact that the force recorded was not normalised for participant body weight, as well as the hand condition (use of/size of gloves etc.) and assessment methods not being standardised, the findings are inadequate to be used as normative data.