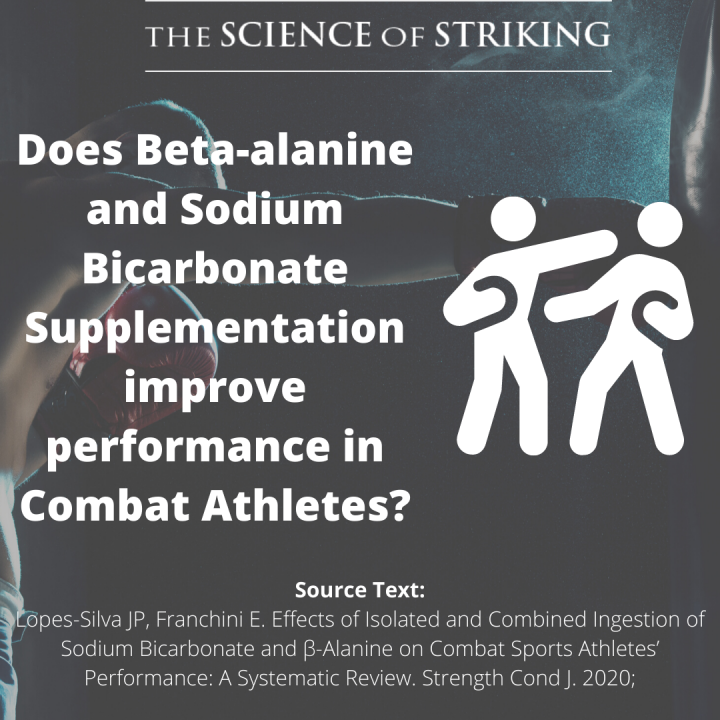 Due to the repeat high intensity burst nature of combat sports, they are highly reliant on glycolytic mechanisms for energy production. Glycolysis results in intramuscular H+, which needs to be buffered via intracellular (phosphates, carnosine) and extracellular (bicarbonate) buffers and a dynamic buffering system.

Supplementary Sodium Bicarbonate and Beta Alanine have both been shown to increase intermittent high intensity exercise performance in other sports. Sodium bicarbonate acts as an alkalizing agent, and helps attenuate exercise-induced decrease in intracellular pH. Beta alanine is an amino acid, the ingestion of which has been shown to increase muscle carnosine content, which helps in intracellular acid-base regulation.

This systematic review studied data from 10 studies investigating the effects of either of these supplements on performance in a total of 197 athletes from judo, wrestling, BJJ, TKD, boxing and karate. Assessment methods included both non-specific (upper body and lower body wingate) and sport-specific (judo-specific fitness test, karate-specific aerobic test, number of strikes thrown and total attack time in sparring) tests.

Both acute and chronic (7-10 days) ingestion lead to improved performance in most studies, with effects of between 4.6% and 34% observed between different tests. Furthermore, combined ingestion of both supplements appeared to provide an additive effect (tested on a lower body wingate test).