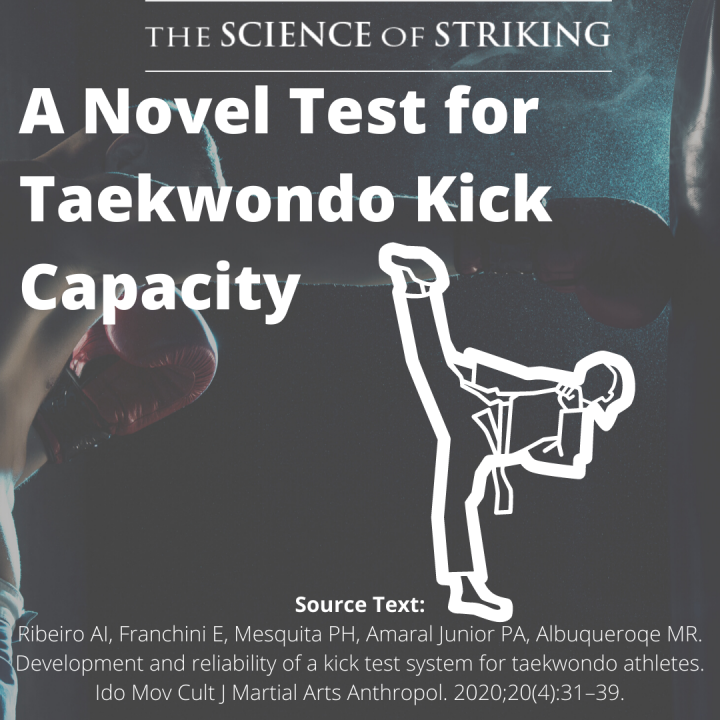 As Taekwondo (TKD) competition is primarily composed of a succession of short-duration, high-intensity interactions, it is important for tests designed to measure the repeat effort ability of its athletes to assess these characteristics.

Previous TKD-specific tests, such as the Frequency Speed of Kick Test (FSKT) have used metrics such as the total number of kicks in a certain amount of time. The authors of the current paper felt that these tests lacked the specificity to detect small changes in improvement following training interventions.

This study sought to test the reliability of a novel TKD-specific test, with a triaxial accelerometer attached to a kicking dummy.

17 competitive TKD athletes underwent an initial testing session, where the force of their kicks was analysed to determine a threshold for kick force during the actual assessment.

The actual test involved measuring the time taken to perform 20 kicks (alternating legs), as well as the interval between the kicks. This was performed for 5 sets, with 10 second rest in between. The results using this system were then compared to those from video analysis with Kinovea. The system was able to detect 100% of the kicks performed.

The time to perform 20 kicks for each set across the 5 sets was between 9.4s and 11s. Between 2 testing sessions, the assessment demonstrated moderate to good reliability for time interval between the 1st and 20th kicks. It also showed good correlation with the Kinovea results, indicating that time motion analysis could also be utilised where this more advanced technology was not available.