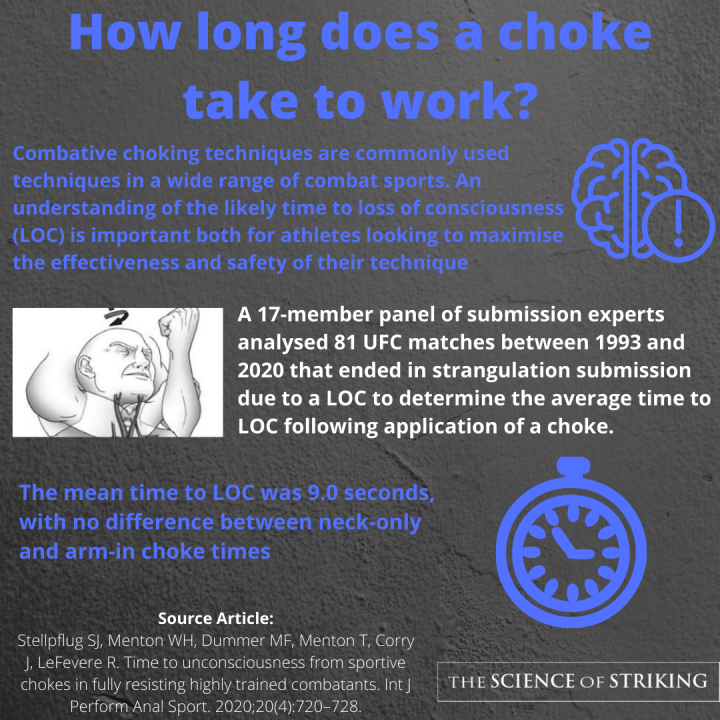 Combative choking techniques (more accurately described as strangulations) are commonly used techniques in a wide range of combat sports and arts, as well as in law enforcement. The goal of a strangulation is to cause bilateral compression of the carotid artery and jugular vein, decreasing the cerebral perfusion pressure and leading to a loss of consciousness (LOC). An understanding of the likely time to LOC is important both for athletes looking to maximise the effectiveness and safety of their technique, as well as for law enforcement officers looking to minimise potential harm. Previous research in compliant (not defending/resisting the technique) subjects has shown a range of 5 to 19 seconds, with most studies determining 7-11 seconds as an average time to LOC. However, to date there have been no studies examining time to LOC in actual sportive combat.

A 17-member panel of submission experts (including BJJ black belts, experienced grapplers, former MMA athletes, and medical professionals) analysed 81 UFC matches between 1993 and 2020 that ended in strangulation submission due to a LOC (as opposed to tapping). Each examiner reviewed each film (blinded to the other’s interpretation) to determine the time between full application of the technique and LOC.

The mean time to LOC was 9.0 seconds, with a standard deviation of 2.5s. There was no difference between neck-only and arm-in choke times, and only the arm triangle displayed a significantly faster time to LOC of 7.2 seconds.

These results were consistent with previous studies in compliant volunteers, indicating that skillfull application of a choking/strangulation technique will cause LOC regardless of defense mechanism.