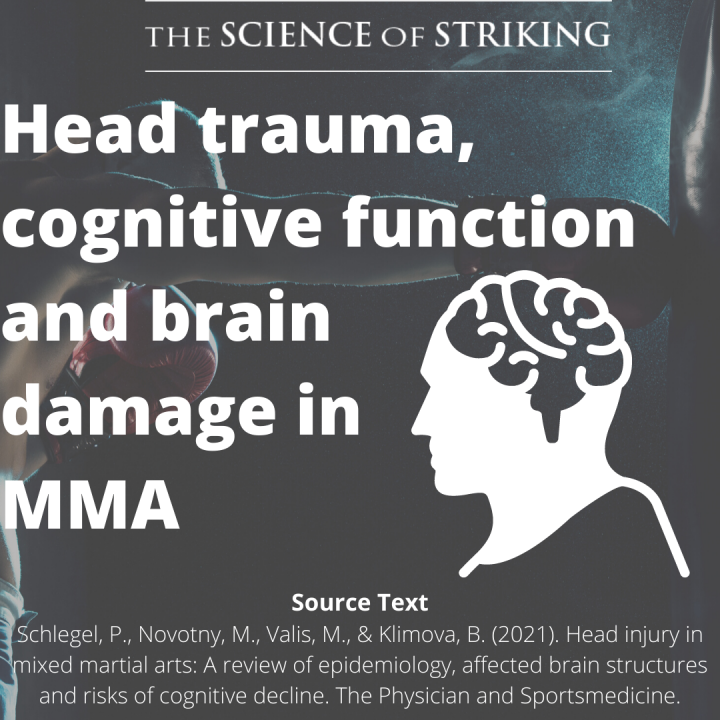 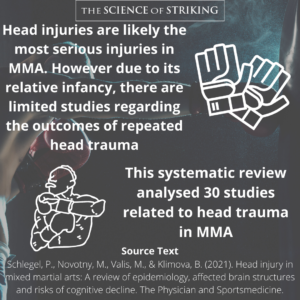 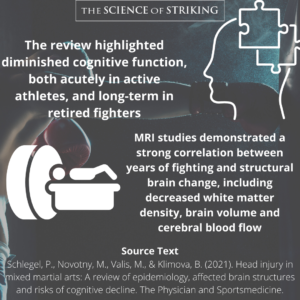 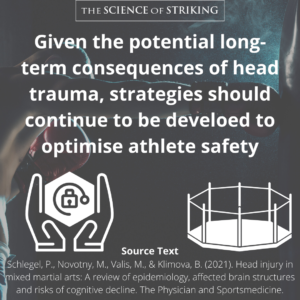 Head injuries are arguably the most serious injuries in mixed martial arts (MMA). Recurrent head trauma is thought to be associated with an increased risk of the development of neurodegenerative disease, and is the primary cause of chronic traumatic encephalopathy (CTE). As MMA as a sport is still in its relative infancy, research into long-term brain health of athletes is scarce.

This systematic review looked at 30 studies of head injuries in MMA and their relationship to cognitive impairments/brain damage. Head injuries accounted for 58-78% of all injuries, with between 29.1 and 34% of athletes reporting having been KO’d/TKO’d in their career. These rates were higher in older and heavier athletes.

Cognitive function tests (such as the The King-Devick test) focused on verbal memory, processing speed, psychomotor speed and reaction time. Performance in these areas was shown to be acutely impacted compared to baseline for those athletes who had experienced head trauma. 2 studies also demonstrated long-term decline in retired fighters.

As the degree of head trauma is partially dependent on the time of stoppage, the authors recommend more vigorous training of referees to be able to recognise signs of cognitive impairment and stop matches at the appropriate time, although acknowledged the logistical difficulties associated with this.

Other recommendations included consistent regulations within the sport of MMA (throughout both professional and amateur competitions) regarding fight stoppage, post-fight assessment, and return to play rules, as well as more thorough athlete and coach education.