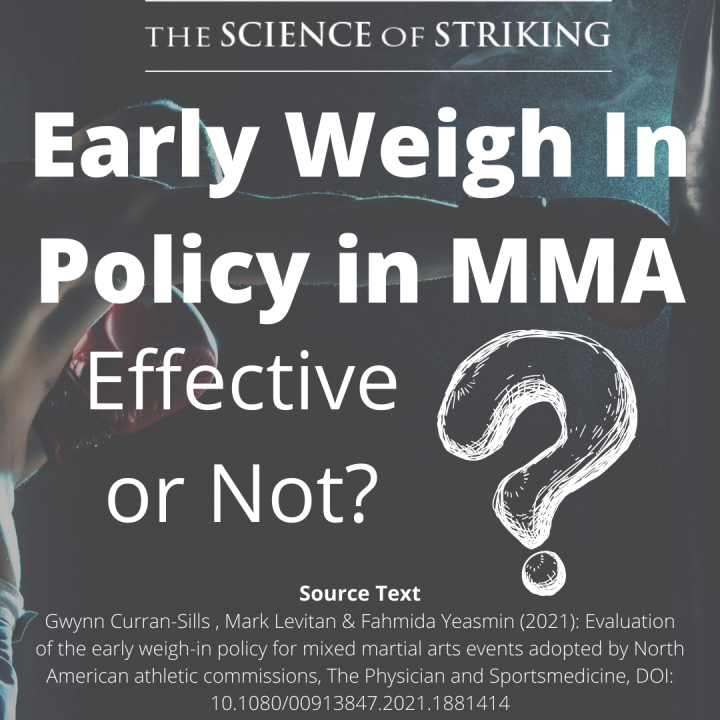 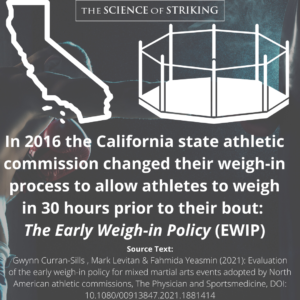 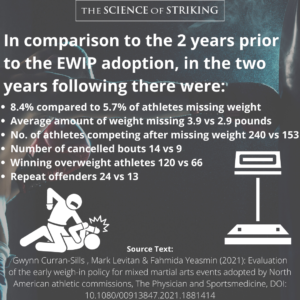 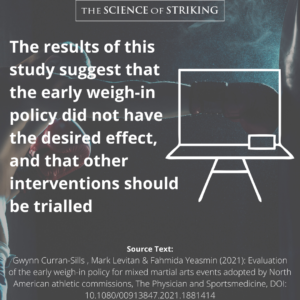 Weight cutting in combat sports, including mixed martial arts (MMA), is a huge issue of debate due to the health risks to the athletes undergoing this practice. In 2016 the California state athletic commission changed their weigh-in process to allow athletes to weigh in 30 hours prior to their bout, rather than the customary 24 hours. This was termed the Early Weigh-in Policy (EWIP). Other measures included banning the use of intravenous rehydration, and allowing physicians to assess the athletes for signs of dehydration. The aim of these changes were to decrease the use of severe hydration techniques, ensure healthy rehydration, and penalise athletes for engaging in extreme weight-cutting.

This study investigated athletes from UFC and Bellator events, who were overweight at the time of weigh-in, over a 2-year period before (120 events) and after (127 events) the adoption of the EWIP. The definition of “overweight” was being greater than 1lbs (0.45kg) over the limit for their weight category.

5.7% of athletes in the period prior to the rule change, and 8.4% of athletes in the period after, were considered overweight. This increase was predominantly in female athletes. The average excess was 2.9lbs in the pre-EWIP and 3.9lbs in the post-EWIP. There was a significant increase in the number of athletes competing after missing weight (240 vs 153), bouts cancelled due to missed weight (14 vs 9), winning overweight athletes (120 vs 66), and “repeat offenders” (24 vs 13).

Although the study did not seek to investigate causes for data observed, it is thought that the longer window of recovery actually encouraged athletes to attempt to lose greater amounts of weight prior to the weigh-in.

The results of this study suggest that the early weigh-in policy did not have the desired effect, and that other interventions should be trialled. Some suggestions by the authors included: