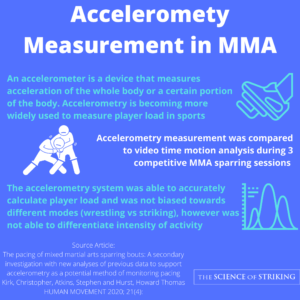 The ability to pace oneself in any physical activity (whether in training or competition) is critical to achieving successful competition results, as well as training in a fashion conducive to optimal outcomes and minimising the risk of overtraining. For endurance training modalities, developing a pacing strategy is fairly straightforward. In multi-faceted activities such as combat sports, however, the recording activity loads presents a significant challenge. The use of accelerometry is one proposed method of recording activity athletes and subsequently guiding pacing strategies.

This current study involved re-analysis of a previous study. Whereas the previous study provided data by individual round, this looked at the data by each individual minute. 6 elite-level male MMA athletes participated in a 5-minute, 3-round sparring session.

Each athlete was fitted with a Minimax X3 110HZ triaxial accelerometer (Catapult innovations) at the T3/4 vertebrae level. The findings from the accelerometer were referenced with time motion analysis camera footage.

Whilst conducted on a relatively small sample size, this study delivered promising results in terms of accelerometry methods being an effective way of tracking player load in mixed martial arts. This technology does, however, need to become more accessible to athletes and gyms before realising widespread use.